There are very few scholars who can teach this veda in the country at present.

Here is a Veda Patasala that deals exclusively with “Atharva Veda”, the most endangered of all the four Vedas.

While most such Patasalas teach Rigveda, Yajurveda, Samarveda too, Navajeevan Atharvana Veda Patasala in Tiruchanur is determined to make a difference by taking up only Atharva Veda, which is learnt or taught only by a handful in the entire country.

There are just around 10 qualified scholars and 100 – 120 learners of Atharva Veda in India, in sharp contrast to the thousands available for the other three. It is this alarming situation that propelled the idea of starting an exclusive Patasala, “K. Sridhar Acharya, founder president of Navajeevan group of Charitable Institutions told The Hindu.

Sadly enough, 98 of the 100 branches (Shakas) of Atharva Veda have been lost and only Shownik and Pippala shakas are practiced, that too in some pockets of Odisha and Gujarat.

The school is affiliated to ujjain based Maharshi Sandipani Rashtriya Veda Vidya Pratishtan, which functions under the Union Ministry of Human Resources Development.

Vedas are taught alongside modern education, with subjects like mathematics, science and computers etc., in the seven-year “Veda Vibhushan” course. This course is considered equivalent to the Intermediate education and those passing out are directly eligible for undergraduate course.

There are 30 inmates, who are mostly natives of Madhya Pradesh, Bihar, Odisha, Rajasthan, Jharkhand, Assam and Telangana States.

The course is imparted in true “Gurukul” style, where the little boys grow up by learning the Vedas and serving the Guru. “Atharva Veda is all about environmental science and astronomy, but it is not given its due,“rues Professor Gangadhar Panda of Puri(Odisha), who teaches at the Patasala. While walking out of the corridors of this Gurukul in six years, the future scholars will have significantly contributed to reduce Atharvana Veda’s ‘endangered’ status. 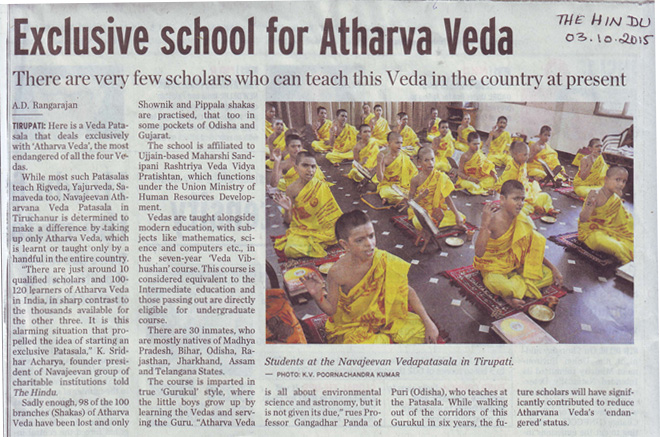 These are some of the babble of the modernized word. A visit to the Navajeevan Ashram, Thiruchanoor, Tirupati (Andrapradesh) where tenderness of human heart and dynamism of divine life fuse, we inhale a breath of fresh air of new life.